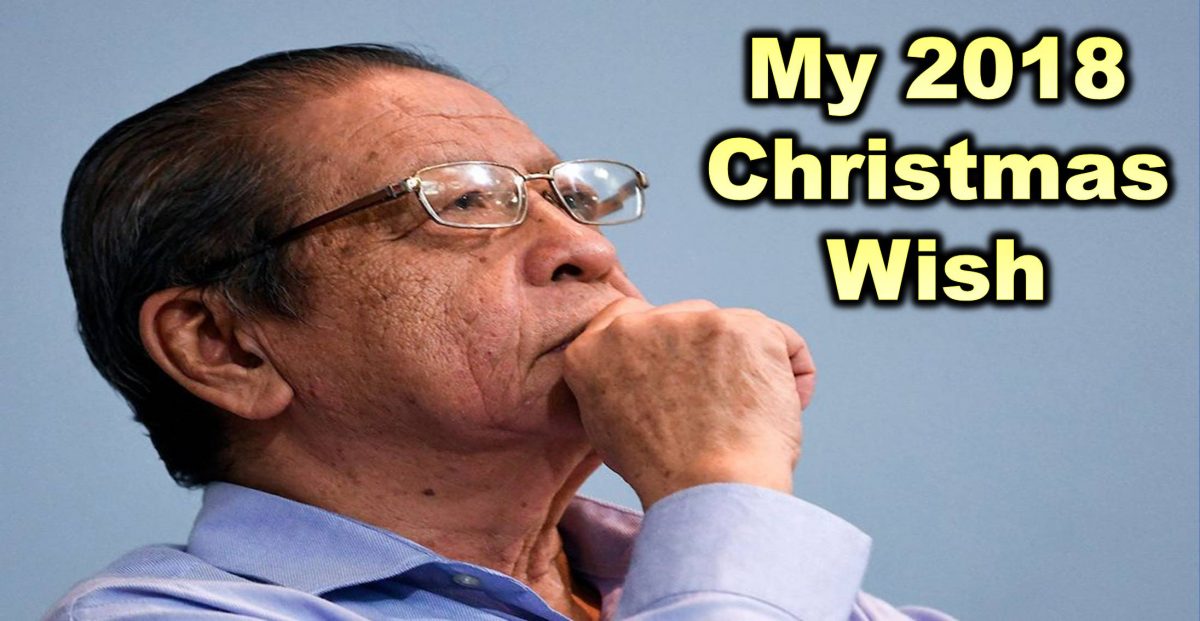 I am not a Christian but that does not prevent me from making a Christmas wish, just as my making a Hari Raya wish would not make me a Muslim. One reason for making this Christmas wish is to elaborate on what I said in Luoyang, Henan last Thursday, where I responded to a FaceBook post from Tan Sri Clement Hii to explain why DAP would never become a MCA2. The five reasons I had given why DAP will never become MCA2 include DAP leaders fighting for the rights and interests of all racial groups so long as they are Malaysians, while MCA fights or claims to fight for the rights and interests of only the Chinese in Malaysia; that DAP want its leaders and members to be in politics to serve the nation and not to serve themselves, whether for wealth, titles or position; and that DAP politics of multi-racialism is the only way to build a united and successful Malaysia unlike the mono-ethnic politics of MCA.

My statement that in such circumstances, the DAP would have no hesitation in leaving the coalition government if the objective of a New Malaysia is abandoned as DAP leaders will never be as spineless as MCA leaders sent the Opposition into sixes and sevens, feeding on their fevered imagination. On the one hand, there was the attempt to provoke the DAP to quit Pakatan Harapan with one PAS leader alleging that I was “bluffing” about quitting the government, and on the other hand, a MCA leader urging the DAP to “grow a backbone” to exit the government. Most comical of all was the statement by a MCA leader professing hurt at my statement that the DAP will never become a MCA2, “hitting the jackpot” without realising it in claiming that DAP did not qualify to be MCA2.

One reason why the national education curriculum needs an overhaul is because we are producing political leaders who do not understand a simple statement – reading what is not there at all. I never said that DAP was quitting Pakatan Harapan. All I said was that the DAP would not be like the MCA leaders who were most famous for being spineless, and that DAP leaders, whether in government or outside, would have no hesitation in leaving the coalition government if the objective of a New Malaysia is abandoned. I have said many times that a New Malaysia is struggling to be born, and it will require the contribution and participation of Malaysians, both inside the country and among the Malaysian Diaspora worldwide, to ensure that this chance to re-set nation building policies is not wasted or does not fail, for there is not going to be another chance.

It will take more than 100 days, two years or even one five-year general election cycle to take its full shape and form and might even take a decade or two. This is why all Malaysians must develop a Big Picture and Long-term Vision perspectives and for my Christmas wish today that Pakatan Harapan will grow from strength to strength to win the next few general elections so as to accomplish the building of a New Malaysia with the resolution of the various inter-party and intra-party Pakatan Harapan problems, differences and conflicts. Malaysians want a New Malaysia which is united, democratic, just, progressive and prosperous.

Malaysians want a new Malaysia which is a world top class nation which is capable of leveraging on the best of the diverse races, languages, cultures and civilisations that meet in confluence in Malaysia so as to gain international respect and admiration as a successful nation which leads the world in integrity, human excellence and achievement, and not scorned as a global kleptocracy hurtling towards a kakistocracy and failed and rogue state status.