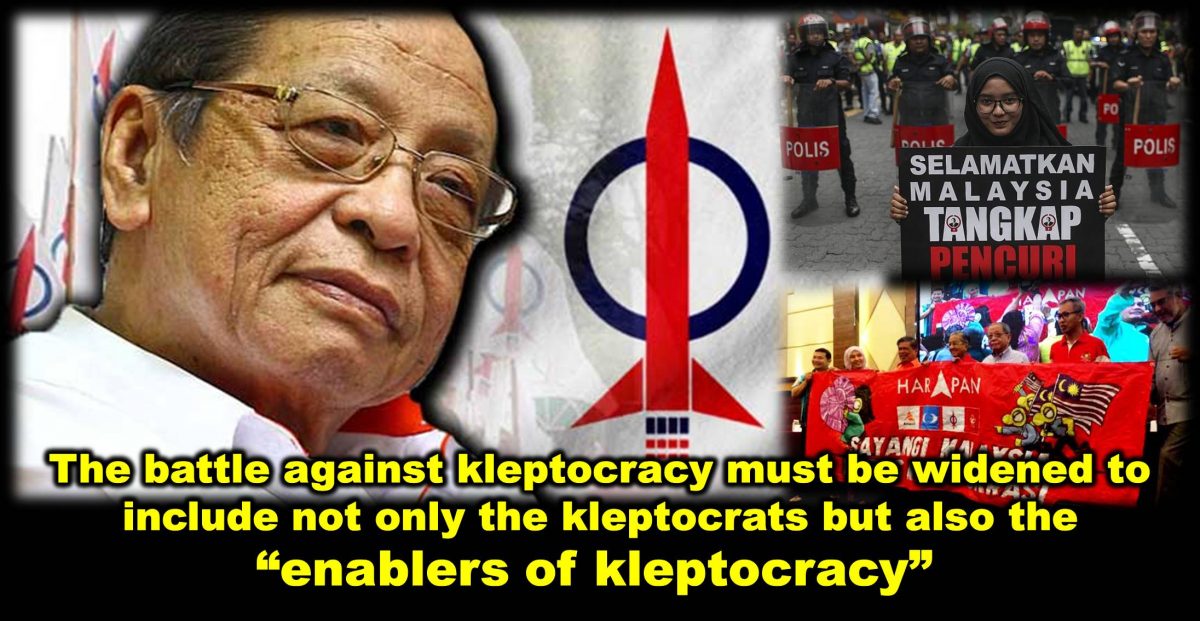 It is good to see that a top MCA leader has acknowledged the existence of “enablers of kleptocracy” in a media statement dated 1st January 2019, although the MCA leadership has still to pluck up sufficient political courage and patriotism to acknowledge that the ignominious chapter in the nation’s history where the country was condemned worldwide as a “global kleptocracy” was because MCA Ministers and leaders became “enablers of kleptocracy”, aiding and abetting former Prime Minister Datuk Seri Datuk Seri Najib Razak in the monstrous 1MDB corruption and money-laundering scandal and other 1MDB-line scandals in Felda, Felcra, Tabung Haji and MARA. Malaysians must adopt the attitude that governments can come and go, but the campaign to improve Malaysia’s integrity in the international community must continue relentlessly, as reflected in the various integrity indices, like the annual Transparency International Corruption Perception Index.

This is why on final days of 2018, I had called for a step closer to closure of the monstrous 1MDB scandal and kleptocratic Malaysia with all who had aided and abetted Najib in his kleptocratic rule – including former Ministers and MPs – apologising to all Malaysians for being “enablers of Najib kleptocracy” instead of carrying the cross of being “enablers of kleptocracy” into the new year, like the MCA President Datuk Seri Wee Ka Siong and the PAS President, Datuk Seri Abdul Hadi Awang. Furthermore, I had also urged all political parties and politicians, including MPs of the 13th Parliament, to return to public coffers any funding and donations they had received from the 1MDB scandal.

The first three days of 2019 had begun with a fantastic start with regard to the sacred task to implant the culture of integrity in Malaysia so as to transform Malaysia from a global kleptocracy into a leading nation of integrity. Firstly, there was continuing public debate and expression of shock by a widening circle of Malaysian society over Bersatu vice-president Abdul Rashid Abdul Rahman’s call for the party to use government resources so that it can hold on to power “by hook or by crook”. I believe the overwhelming majority of Pakatan Harapan leaders and members do not want to hold on to power “by hook or by crook” or the Pakatan Harapan would be no different from Najib’s UMNO and Barisan Nasional. The year 2019 will be a test whether Pakatan Harapan government in Putrajaya is committed to electoral and institutional reforms to ensure that the culture of integrity strike deep roots in Malaysian society, and Malaysia is looked up as a model by the world in our commitment to accountability, transparency, integrity and good governance.

I fully support Bersih’s call for an Administrative Neutrality Act to deal with political patronage, as well as the abuse of government resources or public power for partisan purposes. Those who commit crimes should face criminal prosecution, while those who fail to justify their acts must be subject to administrative penalties, such as termination of service, demotion or transfer. Parliament should enact a Political Financing Control Act, as stated under Promise 18 in Harapan’s election manifesto, as a measure against the misappropriation and misuse of funds belonging to the government by political parties, as in the 1MDB scandal. Secondly, Malaysians can take heart from the Muar incident over the allegation of 30 per cent commission demanded by politicians over educational development allocations to schools, and the alacrity with which the Minister of Youth and Sports and MP for Muar, Syed Saddiq Syed Abdul Rahman, had acted in asking his office to lodge a police report over an individual claiming to be “an assistant of the Muar MP” and soliciting 30% commission for services. 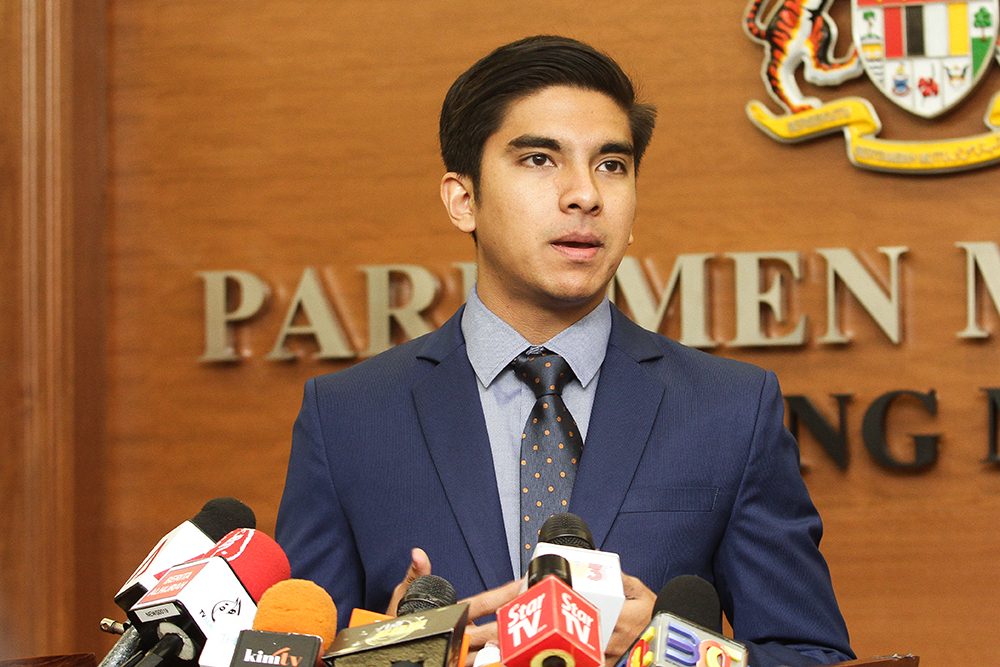 Thirdly, the Court of Appeal decision yesterday upholding the Kuala Lumpur Sessions Court decision on Feb. 19, 2016 jailing the former Pahang Umno Youth chief Datuk Mohd Mustafa Mohd Khalid for three years for cheating a managing director of a company of RM1 million over a Scanning System project. It is a clear and unmistakable signal that the era that politicians and political operatives can get away with corruption and bribery with immunity and impunity is over, and there is a new respect for the rule of law to maintain public integrity in Malaysia. Fourthly, and most important of all, the country will be holding a parliamentary by-election because we are entering a new phase where there must also be integrity in the electoral process, where there is no money politics and electoral offences in elections.

The Cameron Highlands parliamentary by-election on January 26 will be the first of its kind, heralding that the country is committed to integrity in its public institutions and systems. The Camerons Highlands by-election should be between integrity as represented by Pakatan Harapan and kleptocracy as represented by Barisan Nasional. It was from the Orang Asli in Cameron Highlands that I learn the term “roti canai” roads, ie. substandard roads, because of poor workmanship and corruption. These “roti canai” roads rapidly deteriorate as there is only a thin film of cement on top to hide the shoddy work. Let the Cameron Highlands signal the advent of a New Malaysia, where corruption and improprieties in any form are condemned and penalised. Is the Barisan Nasional prepared to enter into a pledge of public integrity in the Cameron Highlands by-election, highlighting the national resolve and commitment to instil a culture of integrity in public life including an unremitting war not only against kleptocracy but also against the enablers of kleptocracy in Malaysia in the past few years? 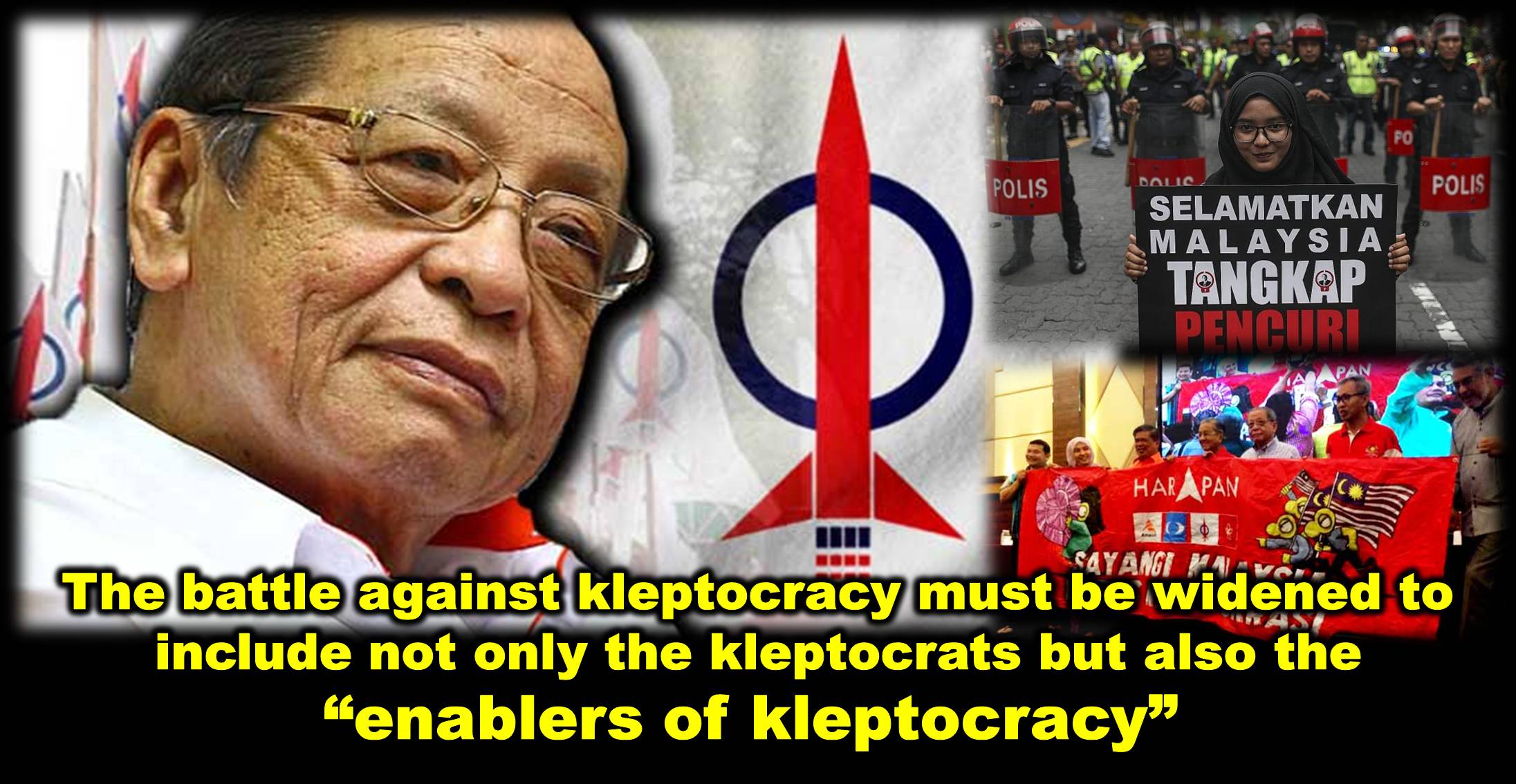