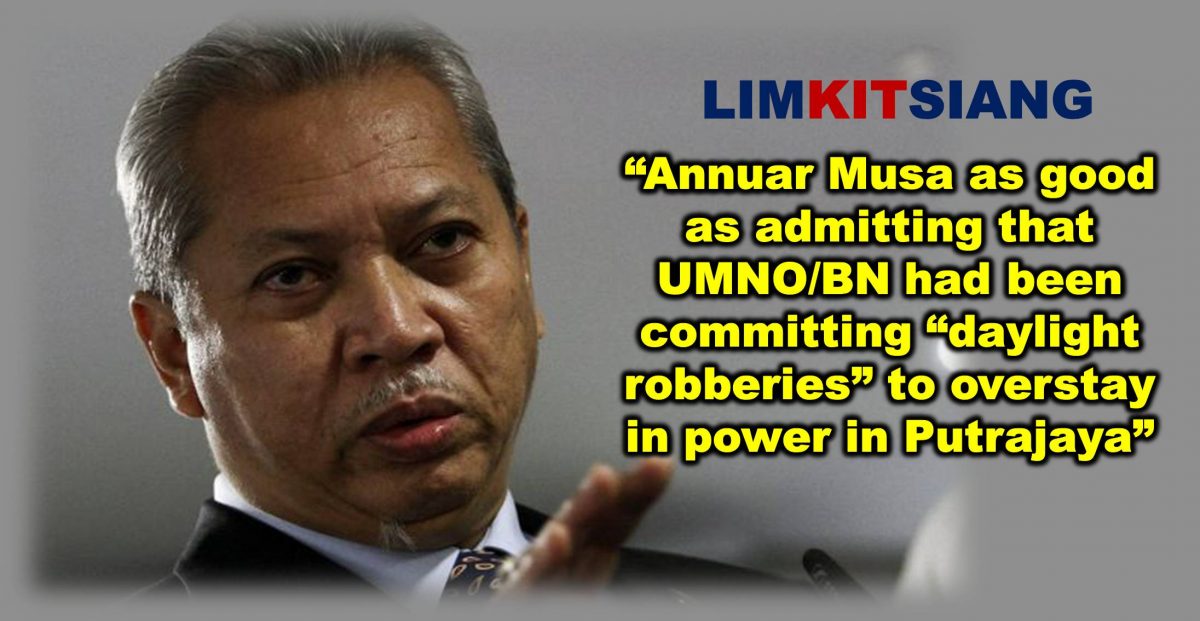 Media Statement by LIM KIT SIANG : I am surprised by the outburst by the UMNO Secretary-General Tan Sri Annuar Musa yesterday contesting my claim that DAP and Pakatan Harapan will be the underdogs in the Cameron Highlands by-election on January 26, 2019, and that my being trapped in Kampong Orang Asli Simoi Lama in Ulu Jelai on New Year’s Eve was an indictment of the failures and neglect of the UMNO/Barisan Nasional government over the last few decades to uplift the Orang Asli community into the mainstream of national development, where the Orang Asli community can enjoy access to the most basic necessities which the Orang Asli people are entitled to as citizens of Malaysia, whether in medical aid, educational and economic opportunities, basic infrastructure facilities of clean water and electricity, and most important of all to them, land rights.

This illustrates the second major difference between Pakatan Harapan and Barisan Nasional. In the former during old times, the JAKOA director-general would be required to be part of the visit delegation into the Orang Asli interior, and every spot of the visit followed and anticipated. Was it conceivable that the Director of JAKOA would have been trapped to spend a night in Kampong Orang Asli Simoi Lama, completely cut off from the outside world? In fact, after realising that the Director-General of JAKOA is a local Orang Asli from Ulu Jelai, Cameron Highlands, I paid him a courtesy call in the JAKOA headquarters yesterday. He told me that the three Orang Asli areas which require the most efforts in upliftment in Peninsular Malaysia were Ulu Perak, Ulu Kelantan and Ulu Jelai, with the Ulu Jelai the most backward of all. Ajis, a senior civil engineer at the Public Works Department, served as deputy director-general (development) of JAKOA last October before he became the JAKOA director-general.

I am quite encouraged by Annuar’s outburst over my speech at Kampong Orang Asli Simoi Lama on New Year’s Eve that it would be a “miracle” for the DAP/Pakatan Harapan candidate to win the Cameron Highlands by-election on January 26, for two reasons. Firstly, it is an indication that such a “miracle” might happen. Was Annuar suggesting that the Pakatan Harapan’s victories in four previous by-elections after the 14th General Election – Sungai Kandis, Seri Setia and Balakong state assembly by-elections in Selangor and the Port Dickson parliamentary by-election – were “daylight robberies” by Pakatan Harapan? If so, why such a wild allegation had not been made after these four by-elections, but only being made now by the UMNO Secretary-General? Secondly, Annuar was as good as admitting that UMNO and Barisan Nasional had been committing “daylight robberies” to overstay in power in Putrajaya, enabling them to continue to be ensconced in power in Putrajaya in total disregard of the democratic principle of “one man, one vote, one value”!

In responding to my statement that that it would be a “miracle” if DAP and Pakatan Harapan wins the Cameron Highlands by-election on January 26, Annuar tweeted: “A miracle? With opposition hands tied, accounts frozen, incumbent disqualified, (Election Commission) chief a political appointee, government machinery at Harapan’s disposal, and ‘political donations’ by the millions… no way (will it be) a miracle, Lim, but it is going to be a daylight robbery!” Discerning Malaysians can see through the hollowness of Annuar’s arguments, but this was as good as a confession that UMNO and Barisan Nasional had been committing “daylight robberies” in the last few decades to overstay in power – as evident by the fact that in the 2013 General Election, UMNO/BN won only 47.3% of the popular vote but secured 60% of the parliamentary seats.

May be, Annuar should be reminded as to why we are having a by-election in Cameron Highlands on January 26 – that the Barisan Nasional’s victory for the parliamentary constituency of Cameron Highlands in the 14th General Election was declared null and void by the Election Court which found that corrupt practices had been committed to induce voters to vote for Barisan Nasional! Election Judge Datuk Azizah Nawawi had held that corrupt practices had been proven to have been committed with the knowledge and consent of the Cameron Highlands MP Datuk C. Sivarraajh, namely giving of money to voters to induce them to vote for BN. She said: “I am of the considered opinion that the petitioner has established beyond reasonable doubt that bribery was proven, in that money was given to voters either directly by the respondent or indirectly through Datuk Seri Wan Rosdy Wan Ismail (Jelai Assemblyman) or Achom (an Orang Asli who acted as an agent for Wan Rosdy) and that the money was given to the voters to induce them to vote (for BN).”

What is most incriminating is Sivarraajh’s failure to appeal against the Election Court’s decision despite his announcement that he would be appealing against the decision. Under the circumstances, would Annuar agree that both Sivarraajh and Assemblyman for Jelai, Datuk Seri Wan Rosdy Wan Ismail, who is the Pahang Mentri Besar, should be asked to say away from the Cameron Highlands by-election as both of them have been named as involved in corrupt practice and money politics in the 14th General Election? Finally, I want to warn all DAP/Pakatan Harapan by-election workers not to be bamboozled by Annuar’s outburst, and never to take things for granted as Cameron Highlands is one of the most invincible UMNO/BN parliamentary constituencies in the country. The 14th General Election result on May 9, 2018 toppling the Najib government was as good as a political “miracle” which I had not expected. Dr. Mahathir Mohamad had said he had not anticipated it either. But Datuk Seri Najib Razak was very sure of winning, even recapturing two-thirds parliamentary majority in the 14th General Election.

Let the voters of Cameron Highlands produce an election “miracle” on January 26 by ensuring a victory for the DAP/Pakatan Harapan candidate! 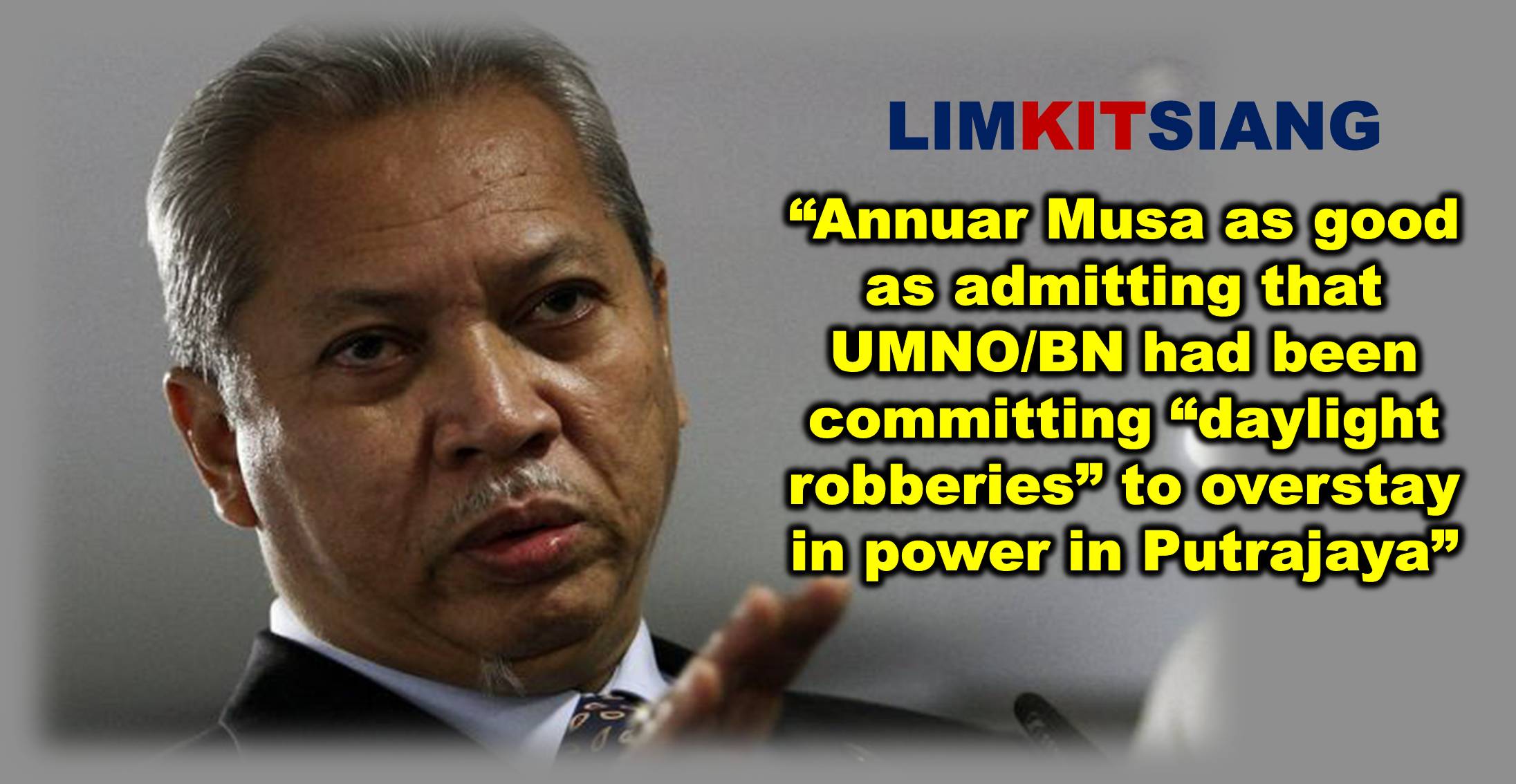