I must apologise to the MCA President, Datuk Seri Dr. Wee Ka Siong as I had not realised that his intellectual capabilities and standards are as low as the other MCA leaders. When I lamented on Tuesday that the national education curriculum needed an overhaul as it was producing political leaders “who do not understand a simple statement, reading what is not there at all”, I had not included him in the category. Last Thursday, I had said in Luoyang, Henan that the DAP will never become MCA2 as DAP leaders will not be as spineless as MCA leaders and that DAP will not hesitate leaving the Pakatan Harapan coalition government if the objective of New Malaysia was abandoned.

I observed in Kuala Lumpur on Christmas Day that my Luoyang statement sent the Opposition into sixes and sevens, feeding on their fevered imagination, with a PAS leader trying to provoke the DAP to quit Pakatan Harapan, while one MCA leader urged the DAP to “”grow a backbone” to exit the government and another MCA leader “hit the jackpot” and unconsciously condemned all MCA leaders with the statement that DAP did not qualify to be MCA2. I had thought that Wee was above these puerile tactics, but Wee publicly jumped into the pit to show that he was on the same level as the other MCA leaders. Actually, Wee “out-classed” the other MCA leaders when he asked why I did a “U-turn”? Are there other MCA leaders who could see such a non-existent “U-turn”, and if so, for everyone of then to declare themselves? Wee asked whether I was afraid of Dr. Mahathir Mohamad.

At the other end of the spectrum of the new toxic politics of lies, hate, fear, race and religion, the UMNO and PAS political desperadoes would be asking Mahathir why he is afraid me! Is this going to be the new politics of the Opposition in Malaysia? This is a variation of the of the toxic politics of lies, fear, hatred, race and religion before the 14th General Elections – with one extreme end screaming that if Pakatan Harapan wins the general elections Malay rights would be wiped out while at the other extreme end, warnings that non-Malay rights would be eliminated. This is not the way to build an united, harmonious, just, democratic, progressive and prosperous society – but to destroy Malaysia as a top world-class nation and condemn it to a future of a sham democracy, kakistocracy, a failed state and a global kleptocracy. Wee pretends to be a brave man in calling me a coward!

Can Wee tell Malaysians what he did as a Minister in the Cabinet of former Prime Minister, Datuk Seri Najib Razak to save Malaysia from becoming a global kleptocracy? The year 2018 which ends in four days’ time has been described as “Year of Anti-Corruption sweep in Malaysia”, with vivid images of the former Prime Minister Najib, his wife Rosmah Mansor, the former Deputy Prime Minister Zahid Hamidi , and Cabinet Ministers and Barisan Nasional grandees trudging up and down the courts to face corruption charges; as well as the police leaving Najib’s condominium at Pavilion Residences, Bukit Bintang carting away 284 boxes and 72 bags filled with expensive items and RM116 million in cash and valuables, including branded handbags such as Hermes and Birkin, jewellery and watches.

What was Wee’s contribution to make 2018 “The Year of Anti-Corruption Sweep in Malaysia”? Wee was one of those leaders who aided and abetted Najib in the monstrous 1MDB scandal and Malaysia becoming a global kleptocaracy – yet he has the impudence and impudence to pretend that MCA stands for integrity! There are those who say that its enough talk of 1MDB scandal, that we should stop focusing on corruption and 1MDB scandal as these matters should be left to the courts to decide, and that the country should turn to more important matters. Does Wee agree? In fact, the battle against kleptocracy as typified by the 1MDB scandal and the other 1MDB-like scandals in FELDA, FELCRA, TABUNG HAJI and MARA has only started. Behind the main culprits in the 1MDB, FELDA, Felcra, Tabung Haji, MARA and other scandals, there is an entourage of enablers and those who chose to remain complicit.

Behind every major corruption, there is often an entire institution that lacks the moral courage to find fault which includes the Najib Cabinet, the 13th Parliament and the various national institutions which were suborned and undermined during the Najib premiership. Does Wee agree that the time has come to demand accountability from all the “enablers” of Malaysia becoming a global kleptocracy, especially through the monstrous 1MDB scandal – starting with Wee himself? 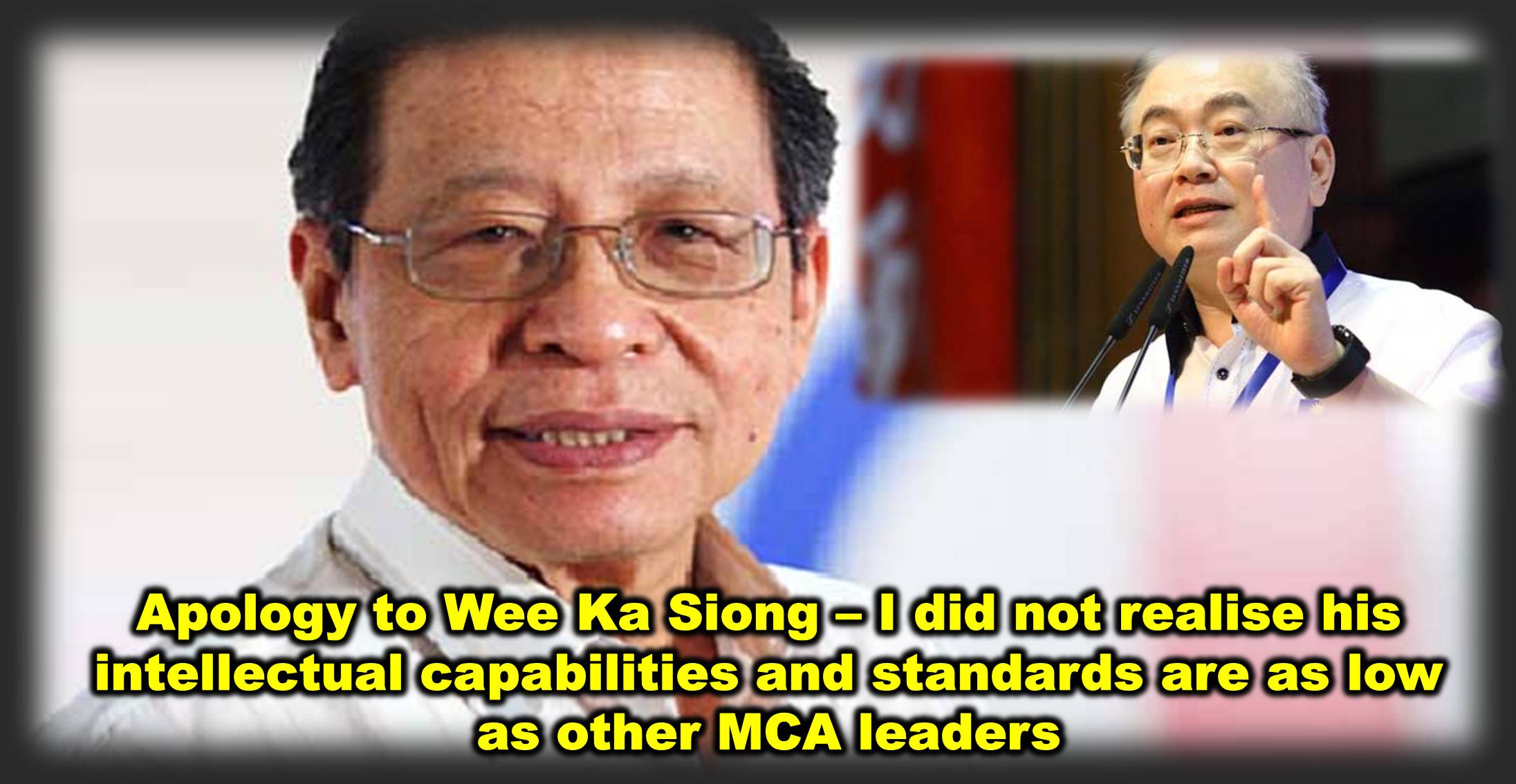